Wroxham, the capital of the Norfolk Broads 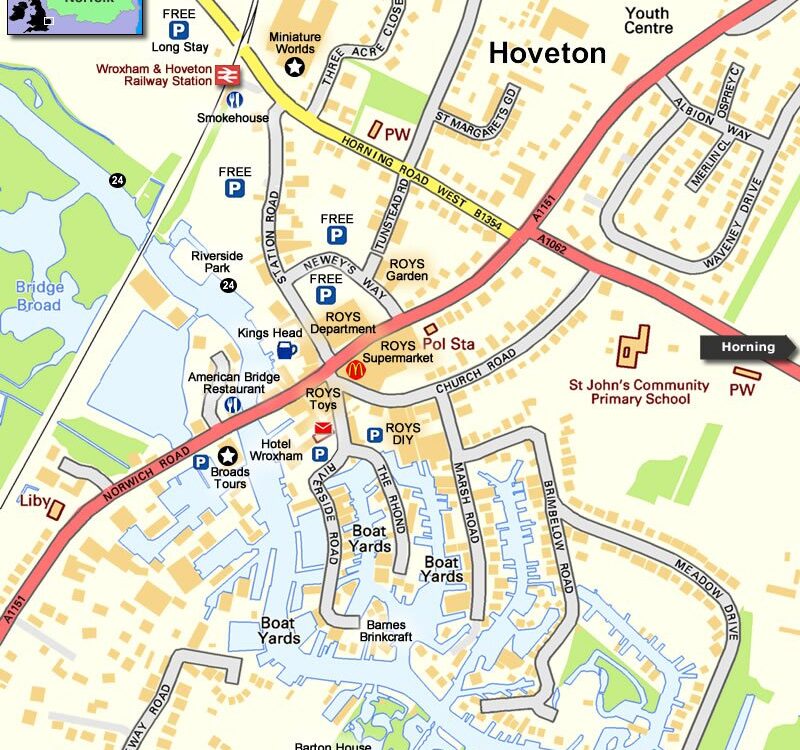 Norfolk's Hidden Gems is pleased to showcase Lilly’s Cottage in Wroxham. It has been completely renovated over the winter of 2019/20. Everything in this cottage is brand new and it feels light and airy just how a holiday home should. This is a lovely two bedroom waterside property on the River Bure at Wroxham. Sleeping up to four people plus a baby, Lilly's Cottage is an ideal place to spend some downtime. Guests can use the property as a base to explore the Norfolk Broads or the wider Norfolk area. The rear deck, accessed from French doors, is situated over the water and can be used for alfresco dining or as a fishing platform in the season if this is your thing. Surrounded by large boats Lilly's Cottage gives you the feeling of being afloat with all the luxuries of a comfortable holiday home.

Wroxham and Hoveton are essentially the same villages, split by the River Bure, just 7 miles from Norwich. It is generally referred to as Wroxham even though most of the village facilities are in Hoveton. From these villages there are boats of all kinds are for hire. There is also an abundance of hotels, holiday homes, pubs, restaurants and shops.

We mention below some of the many visitor attractions Wroxham has to offer. Wroxham is well worth a visit at any time of the year, although the boating takes place in the summer months. There is plenty of parking available, especially in the winter.

A little way out of the village centre is Wroxham Broad, home to the Norfolk Broads Yacht Club. Children can feed the ducks at Granary Staithe or the Riverside Park which is a great place to walk dogs. There is an ice-cream shop in the centre of Hoveton.

The bridge over the River Bure separates Hoveton in the North from Wroxham in the South. The old part of the bridge dates back to 1619 and is a semicircular road bridge with limited headroom for boats. It is one of the most difficult bridges to navigate on the Norfolk Broads. A modern pedestrian bridge stands adjacent to the old bridge giving walkers good views over the river.

Wroxham is the centre of the Norfolk Broads boat hire industry. The first person known to have made a living out of hiring boats to holidaymakers was John Loynes. Faircraft Loynes which was founded in 1878 is named after him. As the popularity of the Norfolk Broads grew many others such as Barnes Brinkcraft followed his example.

Before the ware boating became a recognised leisure interest for the ordinary person. Boating on the Broads by the Victorians mushroomed into a substantial tourist trade. Boatyards sprang up offering all types of craft for hire. Although visitor numbers have now fallen back from the pre-war heyday, hiring boats on the Broads is still a major industry. Today you can holiday with your family and friends sleeping on a multi-berth cruiser. Or you can take an organised cruise or hire your own boat for the day (or hour). You can even hire canoes or paddleboards.

There is a labyrinth of dykes leading from the main river to attractive waterside houses, cottages and lodges. Many of these are for hire to holidaymaker's wishing to be land-based. Some of these come with a boat that you can use during the day. Wroxham makes a good base for your Norfolk holiday since it is located at the heart of the Norfolk Broads. It is also within easy access of both the sandy beaches of the Norfolk Coast and the city of Norwich; all of these are less than 30 minutes drive away.

The Hotel Wroxham is located near the bridge and has a riverside bar and restaurant. Opposite Hotel Wroxham is the Wherryman's restaurant and both offer good views of the river. Situated on the other side of the bridge is Wroxham's pub, the Kings Head with a fabulous riverside beer garden. Inside they have a restaurant, plus a bar screening live sport. Also located near the bridge is 'The Bridge American Restaurant' overlooking the river. This family-run American themed restaurant serves burgers and milkshakes. Scattered around Wroxham are numerous cafes such as the riverside 'Old Mill' Restaurant, plus Number 14 Cafe in the main street.

Shopping in Wroxham is dominated by one brand – ROYS. During the pre-war years, the business expanded due to the increasing volumes of holiday traffic. This helped Roy’s to win its accolade as The World’s Largest Village Store. Roys is split into a number of stores but there are plenty of other shops in Wroxham. These include a small precinct, a Jewelry store, Gift shops, Newsagents, Butchers, Estate Agents and Boating Chandleries. There are also numerous take-away food outlets such as Fish & Chips.

Although Wroxham is an all-year-round resort, it comes to life in the summer. Apart from the land-based attractions, there is the boat hire business. Granary Staithe, adjacent to the bridge, is a great place to eat your ice-cream and to observe the boating scene.

Hoveton contains a small riverside park with 24-hour public moorings, bridges, footpaths and seating areas. The park offers visitors the ability to escape the hustle and bustle of the village and enjoy the natural environment. A path leads under the railway viaduct to Hoveton Viaduct Moorings, located opposite the entrance to Belaugh Broad. The riverside park is also the starting point for cruises aboard the Broads Authority launch Liana. This can be booked inside the Hoveton Tourist Information Centre.

Wroxham is at one end of the Bure Valley Railway which opened in 1990. The Bure Valley Railway is an 18 mile round trip through picturesque countryside. This is as beautiful as any to be found on a railway journey in England. This is Norfolk's longest 15-inch gauge line and runs between the ancient market town of Aylsham and Wroxham. There are intermediate stations at Brampton, Buxton and Coltishall. Visitors can walk or cycle alongside the entire line to Aylsham. For those wishing to travel by train, there are regular steam and diesel train services.

Situated opposite the railway station in Hoveton, Wroxham Miniature Worlds offers numerous classic model and toy displays. These cover classic's such as 00, HO, N & G gauge model railways, Scalextric, Lego and Cindy Dolls. Miniature Worlds has been created by 3 generations of the Green Family – Sean, Robert and Ray. Apparently they created enough models to fill a football pitch. Their work is continually evolving, with new additions and modifications. The exhibition is open all year round and is a short walk from the centre of Wroxham.

The Barton House Railway, consisting of 2 narrow-gauge railway lines, is in the back garden of a large house in Wroxham. Steam, diesel and electric trains operate on this miniature track. There is also a signal box, museum and cafe. It is run by volunteers and opens on the 3rd Sunday of the month from April to September. it is wise to check opening times on their website before planning a visit.

At Wroxham Barns, located a couple of miles north of Wroxham, you will find a working craft centre. Craftsmen demonstrate their skills in individual studios and you can chat with them as they work. The studios include stained glass, pottery, colourful children's clothes and Norfolk cider! You can purchase a range of unique products and many of the craftsmen undertake private commissions. Wroxham Barns also contains a Junior Farm, a Children's Funfair as well as a country food shop.

Hoveton Hall Gardens, situated about a mile north of Hoveton village centre is a delightful 15-acre garden. The season begins with a burst of early Spring bulbs, then the spectacular Rhododendrons and Azaleas in May and June through to the mid-summer delights of the 'Spider Garden'. Full summer colours of Hydrangeas followed by autumn berried shrubs and leaf tints complete a garden for all seasons. The gardens form part of the Hoveton Hall Estate and have limited opening times during the spring and summer months.

The Norfolk Broads Yacht Club is situated about a mile south-east of the village in Wroxham Broad. The best way to get there is by boat along the River Bure, but there is also access by road down a small private track. The yacht club has a large clubhouse, moorings and there are organised events for both members and guests.

Using this handy map you can see where our cottages are in relation to local attractions.

Quick link to another blog article.

This website uses cookies to improve your experience while you navigate through the website. Out of these cookies, the cookies that are categorized as necessary are stored on your browser as they are essential for the working of basic functionalities of the website. We also use third-party cookies that help us analyze and understand how you use this website. These cookies will be stored in your browser only with your consent. You also have the option to opt-out of these cookies. But opting out of some of these cookies may have an effect on your browsing experience.
Necessary Always Enabled
Necessary cookies are absolutely essential for the website to function properly. This category only includes cookies that ensures basic functionalities and security features of the website. These cookies do not store any personal information.
Non-necessary
Any cookies that may not be particularly necessary for the website to function and is used specifically to collect user personal data via analytics, ads, other embedded contents are termed as non-necessary cookies. It is mandatory to procure user consent prior to running these cookies on your website.
SAVE & ACCEPT